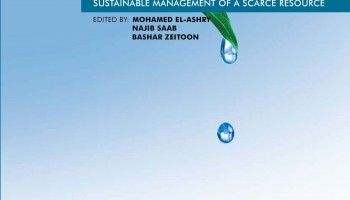 The Arab world is facing the prospect of severe water and food shortages unless rapid and effective measures are taken to address the region's water scarcity dilemma. Even if all available fresh water resources in the region were utilized, Arab countries on the whole would still find themselves below the water scarcity level. Alarmingly, the 2010 report of the Arab Forum for Environment and Development (AFED) has found that Arabs will face, as early as 2015, the condition of severe water scarcity, at which the annual per capita share will be less than 500 cubic meters. This is below one-tenth of the world's average, currently estimated at over 6,000 cubic meters. Water scarcity is a limitation to economic development, food production, and human health and well being.

Why does an allocation that is below 500 cubic meters (500,000 liters) per capita represent severe water scarcity? Some figures can serve as a useful illustration: it takes 150 liters of water to make a quarter liter cup of coffee; one kilogram of wheat needs 1,300 liters, while one kilogram of beef takes 15,000 liters of water to be produced. The larger the difference between a region's water resources and its water needs, the higher its degree of water (and food) insecurity.

Water supply sources in the Arab world, two-thirds of which originate outside the region, are being stretched to their limits. Thirteen Arab countries are among the world's nineteen most water-scarce nations, and per capita water availability in eight countries is already below 200 cubic meters, less than half the amount designated as severe water scarcity. The figure drops to below 100 cubic meters in six countries. By 2015, the only countries in the region which will still pass the water scarcity test, at above 1,000 cubic meters per capita, will be Iraq and Sudan - and even that assumes that water supplies from Turkey and Ethiopia will continue to be sustained at their present levels. Without fundamental changes in policies and practices, the situation will get worse, with drastic social, political and economic ramifications.